The sea is so vast and my boat is so small

A friend of my father had a speedboat on which we were once invited for a ride. A fifty-five horsepower outboard motor at the rear seemed an engine of wholly disproportionate power for the light plastic-hulled boat into which we stepped. Thoughts of skimming along the surface of the water, hardly noticing that we were crossing Lyme Bay, were quickly proven to be unfounded. We seemed to crash along, each wave encountered felt like a solid wall; there was a deafening sound from the engine and the successive impacts with the water. The sea through which I had thought we would skim had been something altogether different than I had expected.

Not only can the water be rougher than imagined, it can also seem a far greater distance to land when you are out in a small boat.

On the last day of one school summer holiday, my father and a group of friends had chartered a boat from Lyme Regis for a day’s fishing. We arrived at the Cobb armed with rods and lines and walked along to where the boat was tied up. An open, clinker-built boat, there was not so much as a wheelhouse; if it rained, we just got wet. It had an inboard engine and was steered with a tiller at the rear.  The boatman was a diffident, weather-beaten man; his boat offered no comfort and he worked in times before lifebelts were considered a sensible option. We set out from the harbour and, whilst we can never have been more than a few miles distant from shore, our boat, which was probably no more than twenty feet long, seemed utterly dwarfed by the water all around us.

Anyone who makes their living by sailing alone into the dark and unpredictable waters of the Channel will always have my admiration. 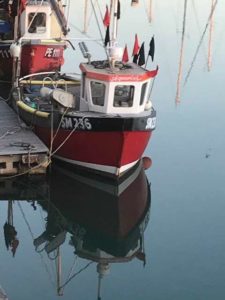