No to the politics of polarisation

To be honest, I had not expected the meeting to proceed. Announced before the England team reached the semi-finals of the World Cup, its starting time was to be the very moment when the football match kicked off. Checking the parish council website on how the meeting had gone, it was a pleasant surprise to read that more than fifty people had attended a public meeting on the creation of a community land trust and that all but one had voted to proceed with the creation of such a trust for our village – a trust which would  be involved in the building of affordable housing and which would be the springboard for other community initiatives.

This was the way that politics in rural England used to be. After the Second World War there was a consensus that people of differing political persuasions should work together for the common good. Countless people could testify to the benefits brought by a spirit of co-operation and generosity. (Having had my university education funded by the Conservative-controlled Somerset County Council, I can personally recall their generosity and their concern for students from their county at a time when those from some Labour-controlled areas would arrive at the start of term and find they had to wait days before the arrival of their grants cheques).

So agreed were the parties on working for a common good that the term “Butskellism” emerged as a description of the consensus, a word formed from the name of Rab Butler, the Conservative architect of great educational reform and Hugh Gaitskell, the leader of the Labour Party. When the then Prime Minister Harold McMillan declared in 1958 that people had “never had it so good,” he might have adduced evidence of standards of living, education, health care, and any other indices that might have been chosen.

Parliamentary politics offered no platform for extremism nor for polarisation, politicians would look askance at those who expressed militant opinions. In the 1970s, there came a divergence and for forty years a gap has widened between Right and Left, each seeing the other as offering nothing constructive. Not only has the gap between politicians widened, their entrenched positions have caused fissures within the general population – the Brexit vote causing splits among friends and families.

Polemic and confrontation were never the way in the past and will only lead to negative consequences for all in the present. If local communities can still work together on issues where politicians would argue on the basis of ideological difference, if it is possible to set aside the politics of polarisation in one place, then it is possible to move forward on common ground in every other place and on every other issue.

Rudeness and aggression have become one of the least pleasant aspects of the current politics, it’s time we learned how to be polite again. 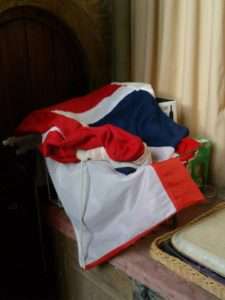