The times are out of joint. Falls of snow in March and a late spring crashed into the arrival of an early summer in April. By June, record temperatures were accompanied by the onset of drought conditions. Now in the opening days of July, grain is ripening, fruit is appearing on blackberry branches, the hay has been made and the fields are white with a lack of moisture.

Four weeks before the first day of August, the conditions described in Ellis Peters’ Brother Cadfael story An Excellent Mystery are almost complete:

“August came in, that summer of 1141, tawny as a lion and somnolent and purring as a hearthside cat. After the plenteous rains of the spring the weather had settled into angelic calm amd sunlight for the feast of Saint Winifred, and preserved the same benign countenance throughout the corn harvest. Lammas came for once strict to its day, the wheat-fields were already gleaned and white, ready for the flocks and herds that would be turned into them to make use of what aftermath the season brought.  The loaf-Mass had been celebrated with great contentment, and the early plums in the orchard along the riverside were darkening into ripeness. The abbey barns were full, the well-dried straw bound and stacked, and if there was still no rain to bring on fresh green fodder in the reaped fields for the sheep, there were heavy morning dews.  When this golden weather broke at last, it might well break in violent storms, but as yet the skies remained bleached and clear, the palest imaginable blue.”

Should the weather continue, then the summer will break more records, but, the year being what it is, anything might happen. August may bring the heavy, thundery days of a ripe summer, but perhaps it will bring the early onset of autumn, already the lack of rain has brought a premature fall of leaves, leaving pavements to be carpeted as if it were September.

In a time of meteorological randomness, the one certainty is that the weather will cause no-one to starve. The experience of those who lived in the age of Brother Cadfael,  when a poor summer could mean a hungry winter, persisted into modern times in a country where a handful always enjoyed an abundance. Mrs Alexander regarded it as the will of God, writing in the second stanza of the dreadful All things bright and beautiful,

The rich man in his castle,
the poor man at his gate,
God made them high and lowly
and ordered their estate.

Thankfully, few are now left who would thus ascribe a poor harvest. Whatever the season brings, it will be better than the Twelfth Century days of Cadfael or the era of bad Nineteenth Century hymns. 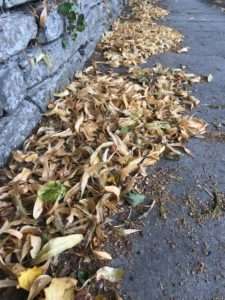