At the kitchen table

The Somerset Rural Life Museum wonderfully creates a sense of the past, the only aspect that is troubling is that memories from my own past now seem worthy of inclusion in a museum, and not just things from the past, but also moments from the present

“It’s Auntie Shirley’s kitchen,” exclaimed my son as we walked the room that was created to typify a typical farmhouse. A few adjustments and it might have been the kitchen I remember from my grandparents’ house.

In my grandmother’s kitchen, a long settle stood against the wall, on those summer Sunday evenings when a large proportion of her twenty grandchildren might have gathered,  it could accommodate an unlimited number of small children, there for the abundant teas that marked the boundary between afternoon and evening. The settle was always the preserve of the many little girls among the numerous cousins, perhaps more could fit in the limited space, perhaps their more refined table manners demanded less elbow room than the habits of uncouth boys. Fits of giggles at silly stories combined with a desire not to incur the displeasure of the family matriarch, all four feet ten inches of her, sat nearest the kitchen door and never needing to raise her voice in order to exert her authority.

The sun did always shine at such teatime assemblies, for had it not been a fine afternoon, so many would not have gathered at the farm. Perhaps children’s appetites were smaller then than now, perhaps there was a contentment to be found in having jelly and ice cream and fairy cakes, but there seemed always more than enough to sate the desires of every child at the table.

The moment owed much to family who had come from afar. Cousins from Gloucestershire and Berkshire created a mood different from that when it was just those from the locality. Perhaps it was similar for all big families, the returning exiles bringing something different to the table.

The chair nearest the window became a personal favourite, perhaps it was the most distant from the threat of the wooden spoon. Sitting at the end of the table meant being able to watch everyone; those from elsewhere had always the best stories and the funniest humour.

The teas were not frequent. It was summertime when the family from afar would come to the farm. It was perhaps only once a year that we sat around that table, yet it was a meal from which memories would linger long. Other accents among our Somerset burrs would tell tales of excitement and variety far removed from our gentle country lives.

Standing in the rural life museum, I could almost hear the laughter of those Sundays fifty years ago. 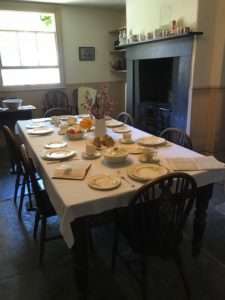