Wandering in the churchyard at Street in Somerset, one inscription on a headstone seemed particularly blunt, “set thine house in order, for thou shalt die and not live.” The deceased had been buried in 1895, his frank acknowledgment of mortality would be unfashionable in the present times.

What would he have made of a moment I experienced twenty years ago? An undertaker stood beside me as we waited for mourners to gather at a grave. “She doesn’t want any soil used at the commital.”

The gravediggers stood at a distance so it was not possible to ask them, did it really only take half a ton of soil to bury someone? Could you really leave someone six feet under with the contents of just ten one hundredweight sacks?

The woman’s request was a precursor of much encountered in the years since, where mourners once filed past a grave throwing in handfuls of soil, they will often now have red roses, completely missing the earthy reality of the funeral prayers. Even the earth itself is now hidden, the pile of soil, half a ton or whatever the actual weight, is covered with artificial grass matting, pegged down so that none of the mud is visible. Even the area around the grave now seems to be matted, it makes for clean shoes but isn’t it an avoiding of the issue? Once, I saw a coffin lowered down through garlands of ivy that had been used to adorn the grave, to attempt to almost conceal the opening in the ground.

Even the vocabulary has changed, “death” is now as taboo a word as “sex” was in the times of the Victorian gentleman buried in Street. Euphemisms abound, even “pass away” is a blunt term when compared to suggestions that the deceased “has gone to be with” whoever it is from the family that has died before them.

Is all the avoidance of the issue good for us? The old “Book of Common Prayer” did not even have anything called a “funeral” service, it had an order for “The Burial of the Dead”, an order that was nothing if not blunt, to the extent of referring to worms destroying this body. Perhaps it was unduly harsh, but in the quest for sensitivity we have swung to an opposite extreme, pretending that the harsh reality of death is something other than what it is.

Death is never something that can be coped with through euphemisms, how can people cope if the truth of their pain is not acknowledged? Sensitivity is important, but so is reality. “Thou shalt die and not live,” it happens to us all. 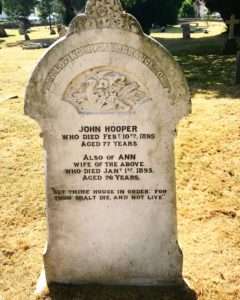