There is surprise at the ages some had reached. One’s own ageing process seems sometimes an easier thought than the ageing of others; there seems an odd feeling that some people should remain a certain age, that they should be forever an indeterminate age, an age just after retirement. The headstones in the cemetery testify that people who seemed sprightly sixty-somethings were twenty or thirty years beyond the age I had imagined them to be; sprightly and youthful farming people who lived into their eighties or their nineties.

There is always a moment of frustration at the grave of Miss Rabbage. The primary school teacher who taught me most of the things worth knowing retired from teaching and left the village at the Easter holidays of 1972. Aged sixty at the time, she seemed very old to a boy of eleven, but had not aged at all when I saw her ten years later, when she would have been seventy. By the time I had access to broadband internet in 2004, and could spend time online engaged in random searches, Miss Rabbage’s name was nowhere to be found among telephone directories or electoral registers. Her memorial stone above her ashes says that she died in 2003, at the age of ninety-one, dead just a year before it had occurred to me to look for her. Of course, I might have asked about her in the intervening years, but had never thought to do so.

The most alarming headstones mark the graves of those who did not reach the age that I am now, people who died when I was young and who seemed so much older than the forty or fifty-something years that they lived: warnings of the sudden and abrupt ends to which life can come.

On a Thursday night, there is always a pint of bitter in the local pub, in the company of a weekly gathering of those who could tell the story of each of the names inscribed on the cemetery stones. Perhaps an occasion for a raising of the glass and a toast in the enigmatic words of Rabbie Burns, “here’s to us, who’s like us damn few, and they’re all dead.” 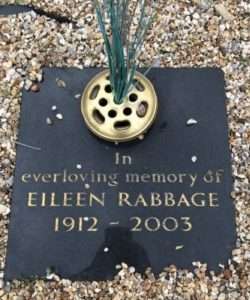