Hooligans and tearaways! Maybe not as bad as that, or maybe worse. Maybe, even, shouted expletives if we had been especially annoying. Apart from the bicycles on which we rode, we didn’t own anything, but treated the village and its environs in a proprietorial manner. Nothing would annoy us more than someone who assumed the right to come in to our space.

Farmers took a mostly benign view of us. Henry, who owned the manor farm, never once commented on our use of his fields for football or cricket. If he was growing grass for hay, we stayed out; and if there were cows with calves, we would be wary; but otherwise his pasture provided us with Wembley Stadium or Lord’s cricket ground.

It was Wembley far more often than Lord’s. Football could be played with two players on each side. Cricket with only four players gave you a batsman, a bowler, a wicket keeper and one fielder; unless the bowler beat the bat, all that was needed was for the ball to be hit onto the side where there was no fielder, getting someone out could take a long time.

Bicycles were ridden without thought that there might be other road users. Bicycles might be transport to go fishing in one of the rivers or drains that crossed the Levels. Keeping legal by paying the two and half pence cost of a junior rod license, no-one ever thought it necessary to ask the permission of a landowner in order to walk along a river bank. It was rare that anyone caught anything, and even the odd fish that was landed was thrown straight back.

More often, bicycles were for racing. Road racing might be over a distance of two miles or more, a triangle of country roads that required no climbing of hills. Perhaps local motorists were alive to the danger of rounding a bend to meet a cluster of twelve and thirteen year old boys in the middle of the road, each of them pedalling furiously and oblivious to the possibility of traffic.

Cross country racing was at Turn Hill, an area of hilltop land that had been left to the National Trust. There were dips and rises and stretches of grass that allowed acceleration and overtaking. The land had been bequeathed to the Trust by a local person, so, in the perception of boys who thought simply, it was reasonable for local people to use it. Apart from the odd muddy track through the grass, no damage was ever done, wild flowers and shrubs were avoided because of a loss of traction and the branches of trees could bring an unwary rider off a bicycle.

Walking Turn Hill last night, it was notable that it remains as deserted as it was in days of bicycle races. Going to a piece of ground that offered a steep drop of eight or nine feet, there was encouragement in seeing that someone is still riding a bicycle. I hope they ride the road with more care than their predecessors – there were no speeding SUVs in 1972. 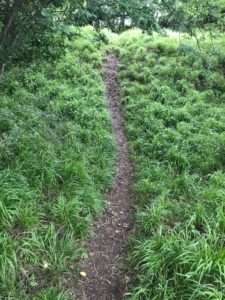