The walls of a circular room at the county museum in Taunton are inscribed with comments on Somerset and its people. Quotes from famous writers include words that are pejorative as well as ones more complimentary, words from unexpected sources appear, among them a comment from John Steinbeck, who stayed in the east Somerset town of Bruton in 1959:

“The other night, I discovered that fifty feet from my , through a break in the trees, you can see St Michael’s Tor at Glastonbury.  There is no question that there is magic here, and all kinds of magic.”

“You should have come to High Ham, instead,” I thought, “you wouldn’t have had to go fifty feet from your house.”

On Thursday evening, a blanket of mist had come down over the Levels, looking north-east from the village, the Tor, that had caught the eye of John Steinbeck, rose like an island from a sea of white fluffiness. It would not have been hard to imagine how Steinbeck had looked across a nocturnal landscape and thought it had a certain undefinable quality.

A Nobel laureate, John Steinbeck captured a sense of 1930s America, the years of the Great Depression. The Grapes of Wrath describes lives lived in the context of grim realities, not much magic of any sort. Why would a writer remembered for detailed depictions of people’s struggle for daily existence talk in terms of a place possessing “all kinds of magic?”

Last week, Somerset Live, the website of five of the local newspapers, carried comments made by visitors to ten of the county’s best known tourist destinations. The visitors had written such observations as the motor museum was only interesting to those who liked cars, and that Glastonbury Abbey was only ruins; the comment on Glastonbury Tor was that it was just a stone tower at the top of a hill, which, of course, it is.

“Magic” is always a subjective quality attributed to a place or experience by a person; where one person saw a stone tower, John Steinbeck saw something else. It does seem, though, that some places are more likely to be ascribed ethereal qualities, that some places possess a capacity to inspire the imagination. Perhaps it is the accumulation of custom and tradition, perhaps it is the passing on of stories and folk tales, that imbue locations with qualities that cannot be photographed or measured. Glastonbury Tor is not magical, instead it is the focal point of centuries of storytelling, what Steinbeck saw was not magic, but a great mass of interwoven tales and traditions. Places now prosaic might become magical for those of generations to come. 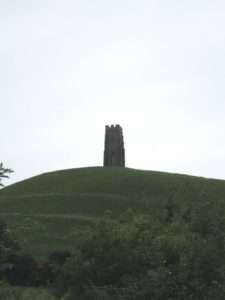